Last summer I found myself looking at some dappled light under a tree. I realized that I didn't really know why it looks the way it looks, made up of a bunch of large, crisp circles. As a Graphics Person™, knowing why light does what it does is a point of pride, so I read up a bit. Now, almost a full year later (the first time in a long while that I have both time and energy at once), I can explain!

If you don't want a full answer, the short answer is that the circles are images of the sun from a bunch of pinhole cameras. But if you are interested, I'll explain it further below. 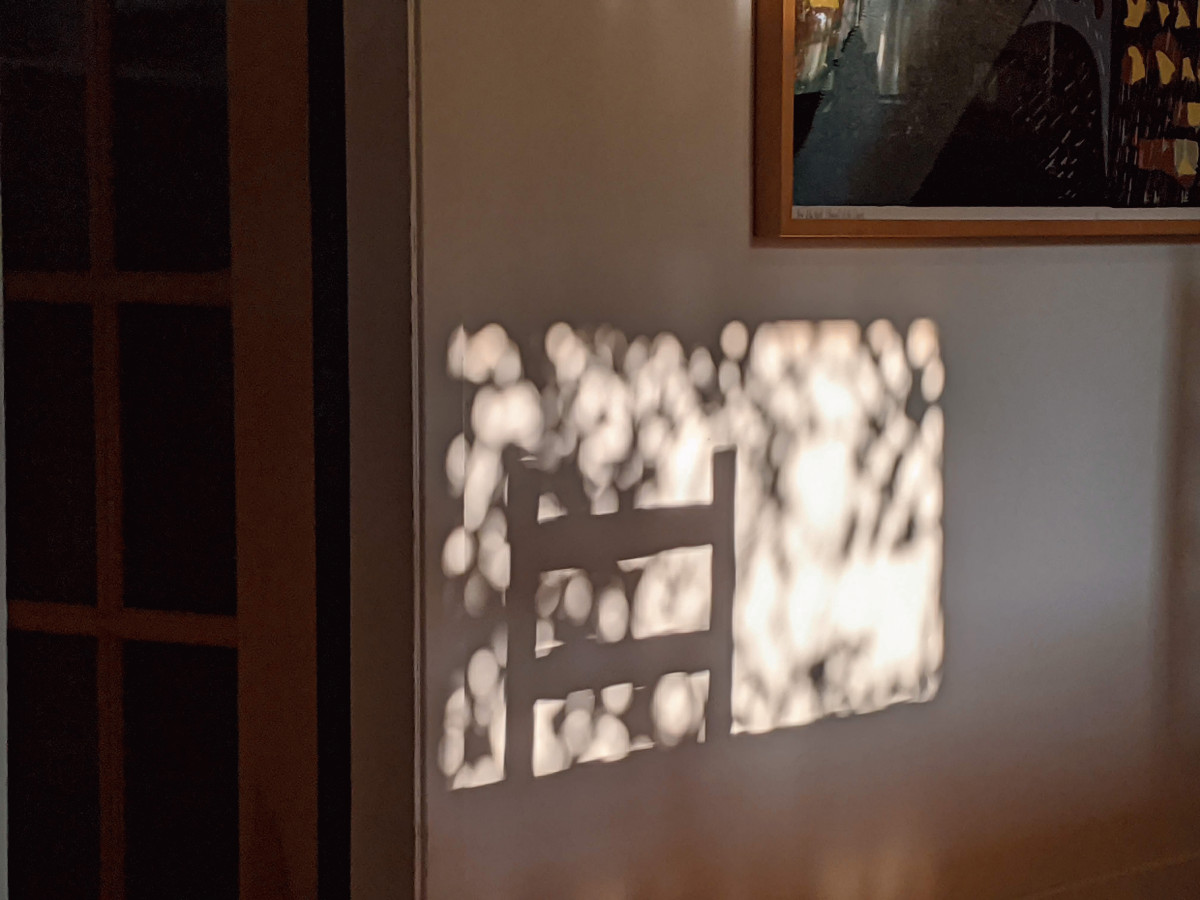 The distinctive circles of dappled light.

Let's quickly go back to basics. How does one end up with a shadow in the first place? Well, light moves in a straight line. If you can draw a straight, uninterrupted line from a surface to a light source (green below), then the surface should be lit at that point. If it hits something (red below), then that point on the surface is in shadow. The resulting shadow ends up forming the silhouette of the object blocking the light source. 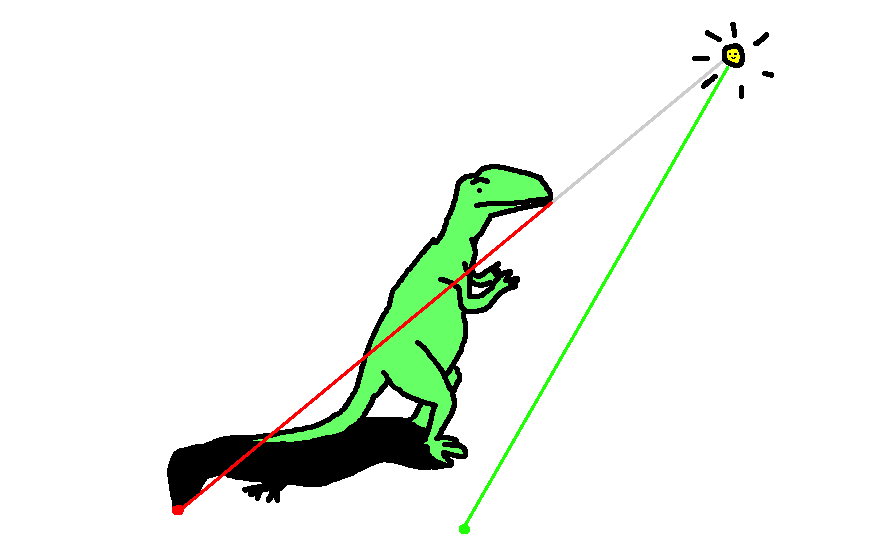 Points that have an obscured path to the light source are in shadow.

If this were the full picture, all shadows would have sharp edges, since this straight line test tells us that something is either in shadow or not in shadow, and nothing in between. But soft shadows are a thing, so where do those come from?

Well, real life light sources tend not to be single points that you can either see all of or see none of. If the object takes up some amount of area in your field of view, you are able to have a partial view of the light source. How much shadow a point on a surface receives depends on how complete a view of the full light source it gets. A full view receives full light; a completely blocked view is fully in shadow; a partially occluded view is only slightly shadowed. The transition from having a completely clear view to having a completely obstructed view is what produces the smoothness in the shadow edge. 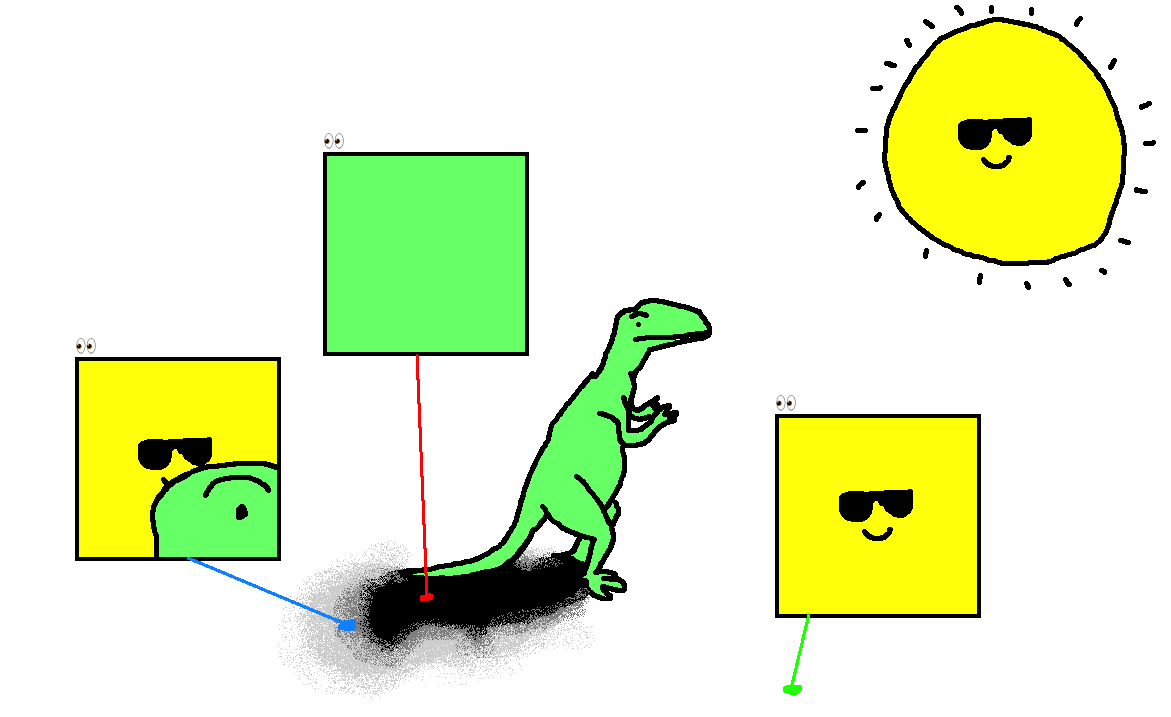 The soft edge of a shadow corresponds to regions that have a partial view of a light source.

The bigger the area of the light, the more likely it is that surfaces will be able to see some of the light source. This is why, when taking portraits, photographers like to use big umbrellas to bounce light onto you: compared to the tiny area of a camera-mounted flash, which will produce hard shadows, the large, diffused area of the umbrella will produce softer, more appealing shadows.

Here's a render of how changing the light area affects the softness of the shadow. Please excuse my poor attempts at adjusting exposure as the light size changes.

Indirect lighting also produces soft shadows. Light doesn't always stop when it hits something: some photons might be absorbed, but others bounce around. Even if your light source is tiny, if it bounces around a room before hitting you, it effectively turns the whole room into a large-area light source (albeit a dimmer one.) Pointing a lamp at the wall instead of directly at you is a low-cost way of getting softer lighting on you in your Zoom calls by turning your wall into a big ol' (indirect) light.

Dappled light confused me initially because it isn't producing a clear silhouette of the leaves occluding the sun, but it also wasn't blurred in the way that soft shadows are. Instead, it's got circles everywhere. What's going on there?

Let's think first about what happens if your shadow is coming from something that only lets in a tiny circle of light. At first, this looks like the same soft shadows from before. 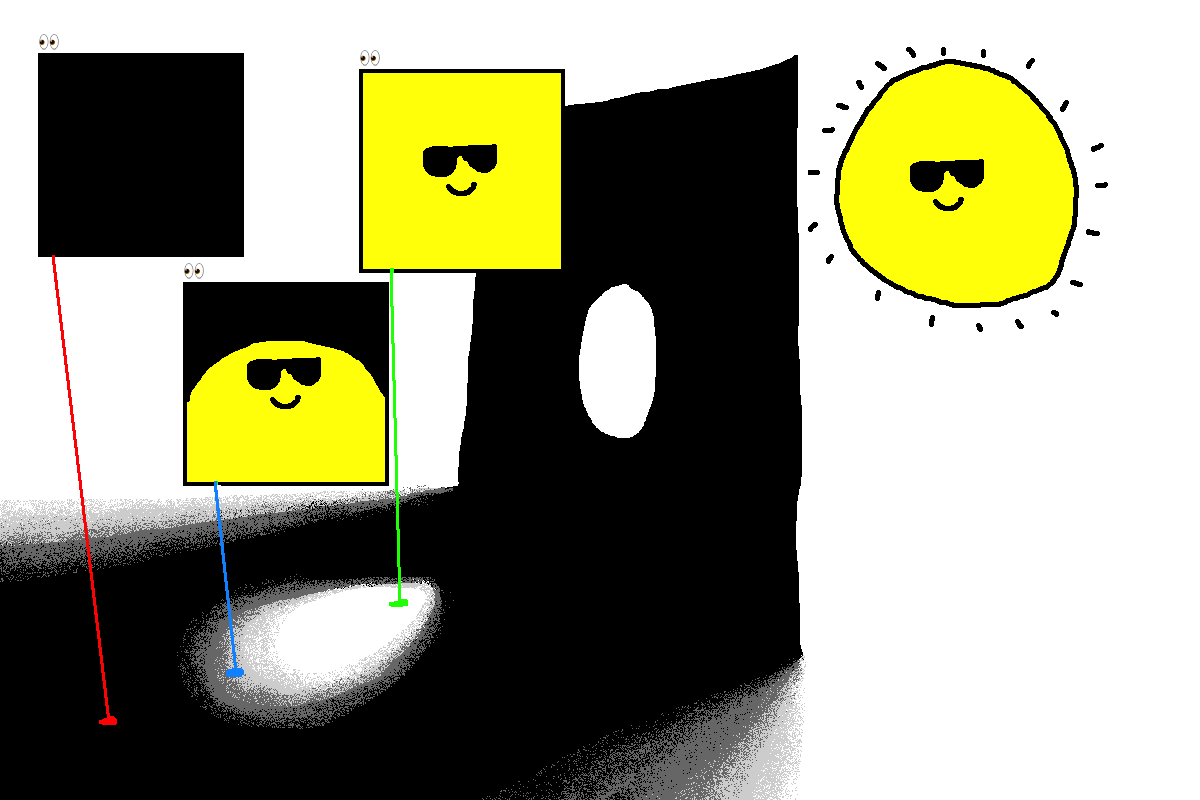 Like before, some points have partial views of the light source, and we get a soft shadow.

Let's keep shrinking the hole until it's so small that it's effectively impossible to have a partial view of the light source, because the view itself is so tiny. Now, we get a hard edge again. This is what we call a pinhole. 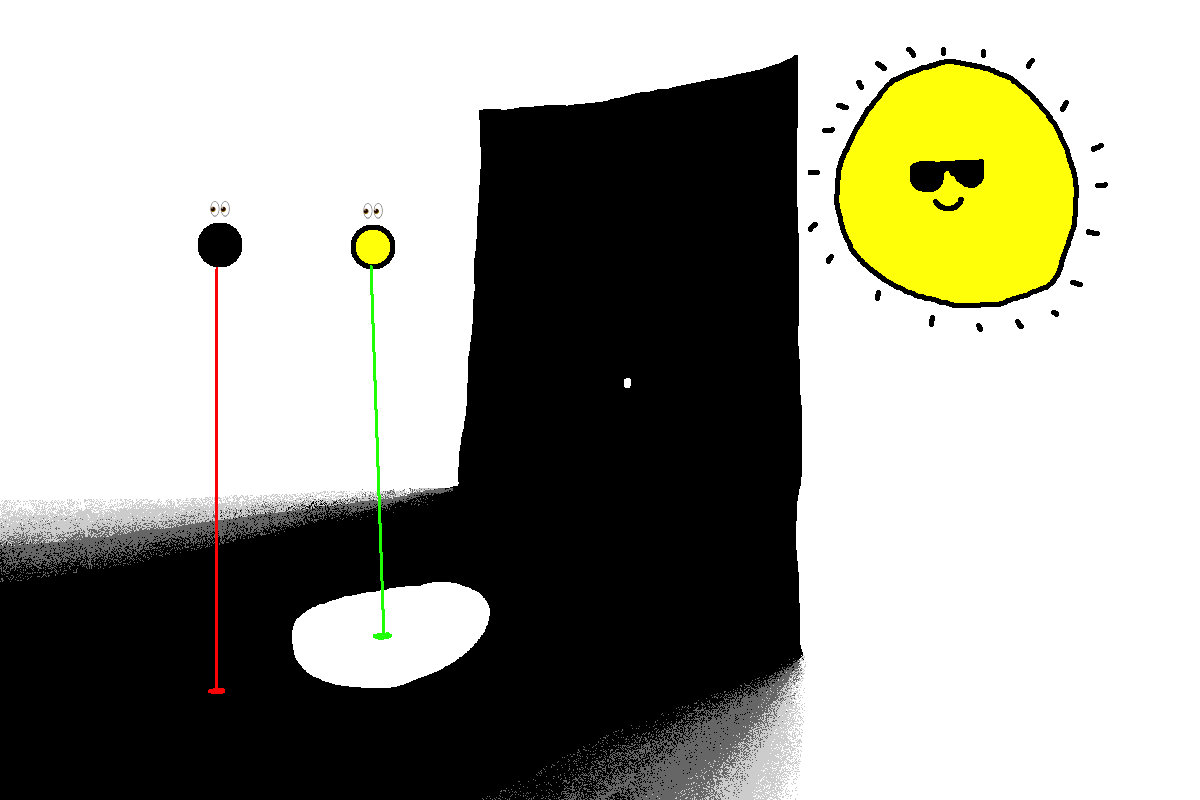 A pinhole opening creates hard edges again since the view is too small to have a partial view.

Imagine we do this experiment again with an object in front of the light source, making it no longer be a perfect circle. The shape on the ground mirrors that new occluded silhouette. This happens in real life, for example, during solar eclipses, so if you don't have special sunglasses, you can look at an eclipse by constructing a pinhole and observing the shape of the light that comes through. 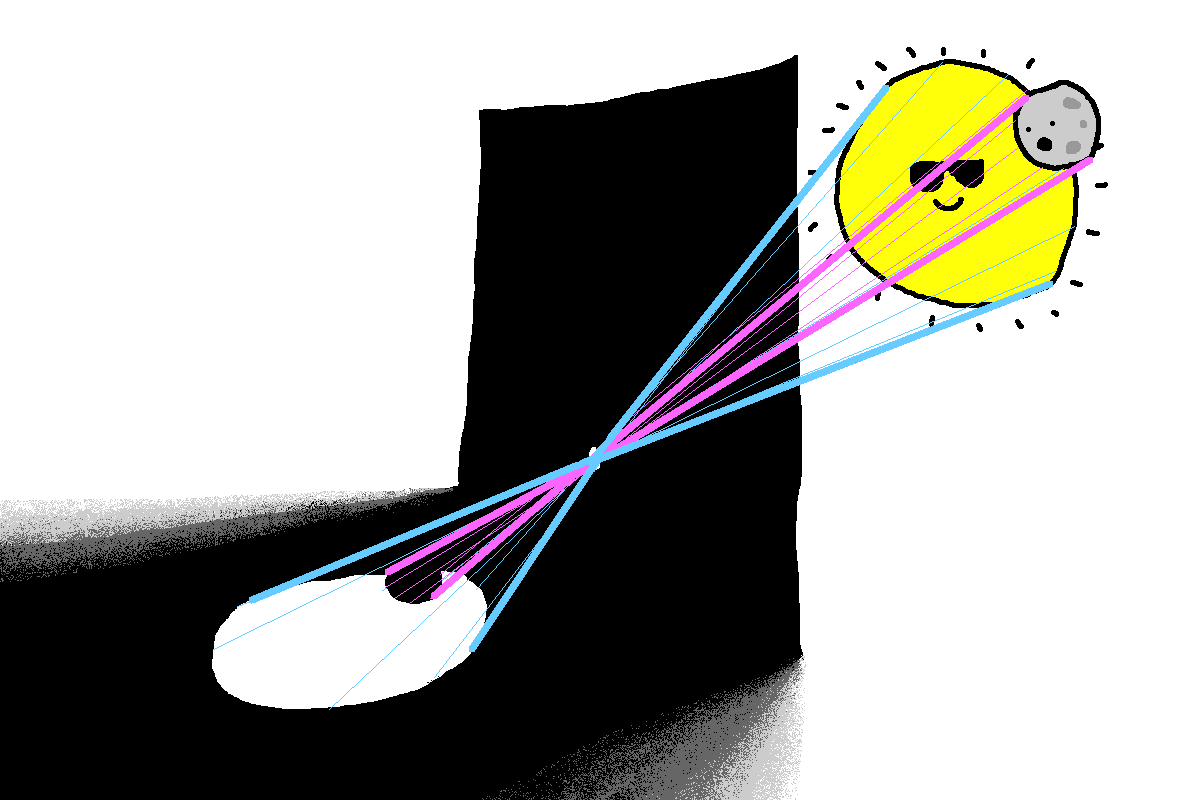 The image shown through the pinhole is the inverted silhouette of the light source, not just a circle.

Here's a render of what it looks like as you change the size of the hole. As it approaches a pinhole, the shape of the light source gets clearer, and a small bite out of the circle due to the occluding object becomes visible.

So, finally, here's where dappled light fits in.

There are just so many layers of leaves on trees that when you look through them, they block most light, and only let through tiny pockets. Pockets tiny enough that they are effectively pinholes. So every circle of light on the ground beneath a tree is actually the image of the sun coming through a pinhole gap between leaves. 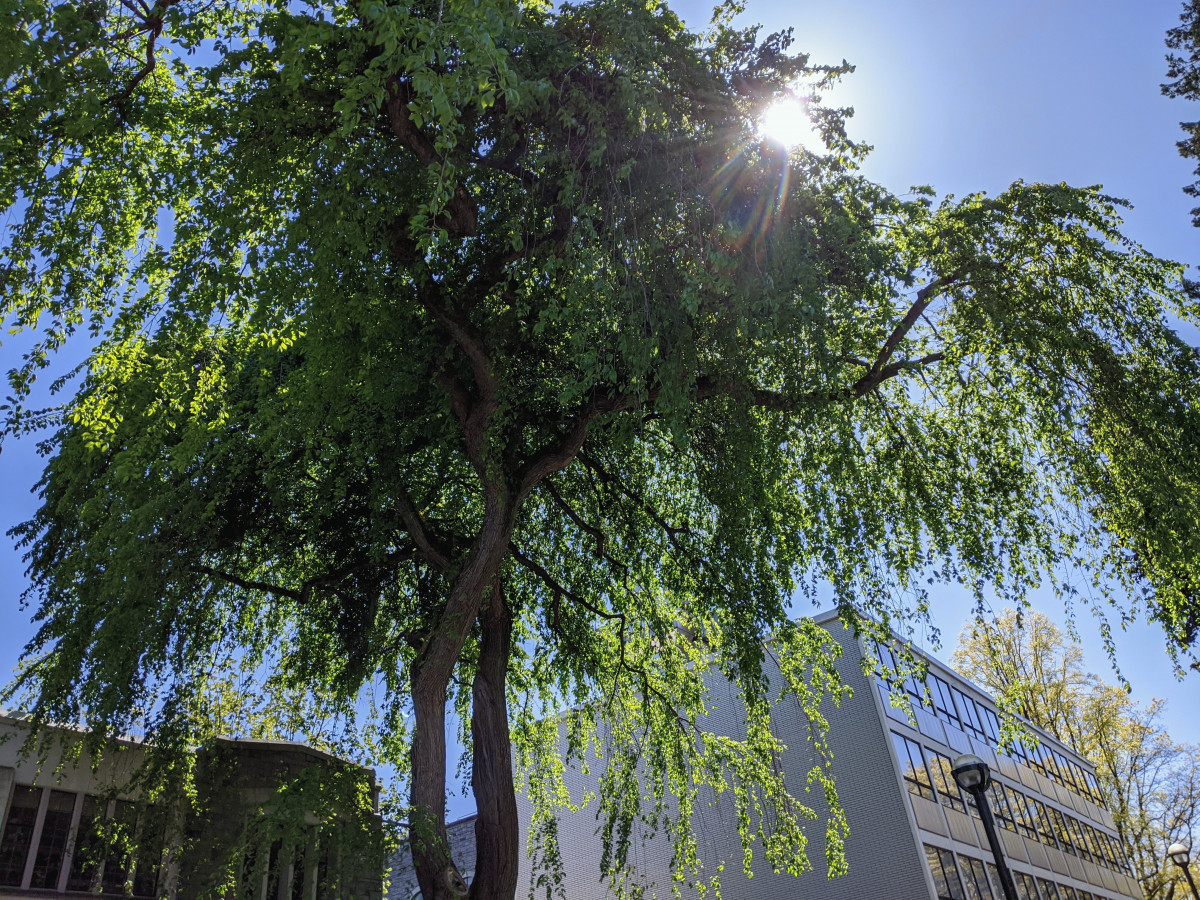 Layers of leaves create only tiny pinholes of open air that let light through.