Artists place notes in a piano roll interface when sequencing digital music. After selecting a time range w 8th notes wide, the computer should fill in the range with notes. The filled notes should have the following properties:

Results are from the more successful model, LSTM+WFC.

Models were trained and evaluated on the piano tracks of the Lakh Pianoroll Dataset, which contains 21,425 multitrack songs. Each piano track is a matrix representing whether note i (where i ∈ [0, 127] is a MIDI pitch with semitone increments) is being sounded at time t (where t is in 8th notes.) 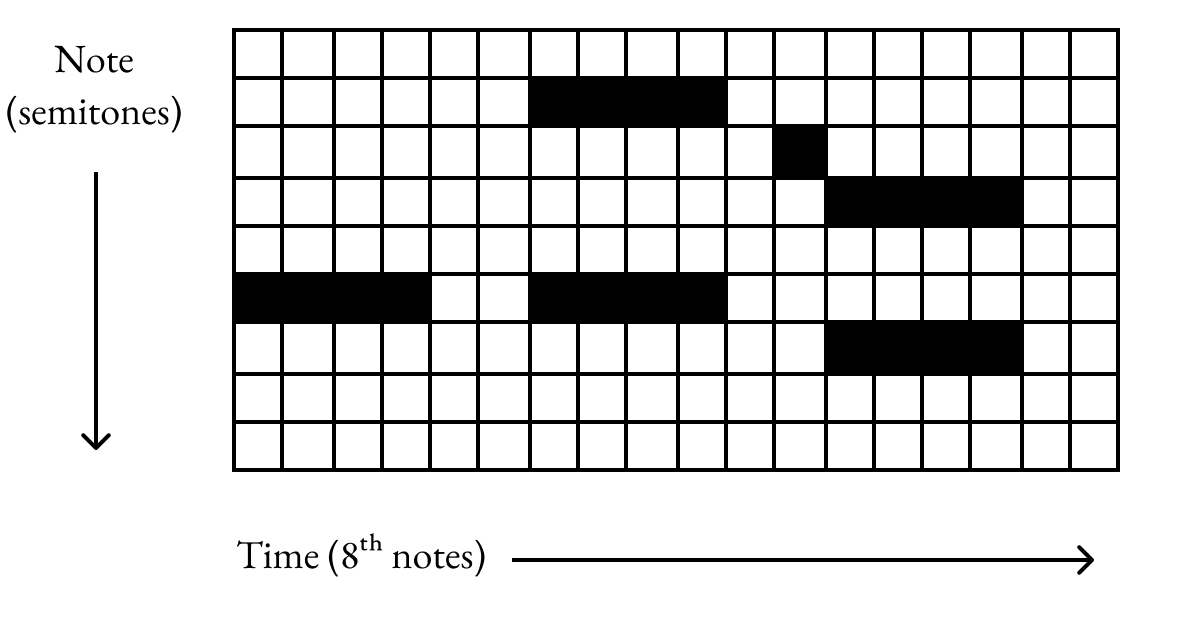 The objective of the project.

WFC models divide the input into tiles and create a constraint satisfaction problem when predicting the value of an unknown tile. Two constraints get enforced:

Each unknown tile, before it is predicted, is thought of as being the superposition of all possible tile options. A tile option is removed if it has never been seen before in its current configuration with adjacent tiles. When a possible tile is selected, the tile is collapsed to that value, and options for surrounding tiles may become impossible.

While there are remaining tile slots to collapse:

A trained LSTM network generates notes based on a prefix of 200 notes. This is used to fill a target region. Individual LSTM nodes in the network have a height of 128 since each input and output is a vector holding information for every pitch. Each output yi represents a vector of probabilities of each pitch being sounded. A boolean vector is sampled for each pitch from these distributions to construct the next time step.

The architecture of the LSTM network.

The LSTM has an output space of possible fillings. The filling that maximizes the likelihood of the suffix s to the filled region is found using Markov Chain Monte Carlo sampling:

A piano roll can be thought of as a Markov chain, where the notes being sounded at time t are a state of a Markov process. The transitions between states have probabilities corresponding to how often those two states occur next to each other. States can use pitch number mod 12 to be invariant to the octave of the pitch.

Errors in the Markov process state transition matrices between various sources and the unfilled region of the song.